← To My Twin Brother
Torah Portion – B’reisheet “In the beginning” →

Once again my birthday rolled around and once again I found myself in a funk. I was not at all looking forward to creeping one more year closer to that “40” mark. At “30” I had a panic attack because I had it set in my head by thirty years of age I should be mature, responsible, and have most of life figured out ~HA!~ So now getting closer to 40 what was I suppose to have “figure out?”

My amazing hubby knew I had been wanting an iPad and was debating between it and a handgun. The handgun would have been practical and probably a better investment than “Another” electronic doo-dad to play with, but hey, I am only in my 30’s, do I have to actually be “Practical” yet? Needless to say… 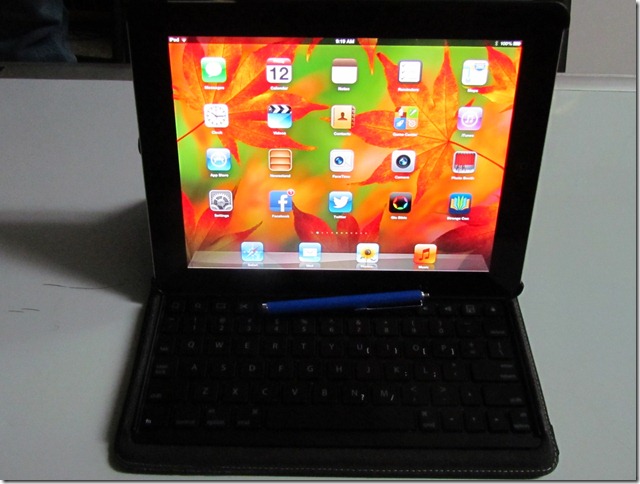 …I am a proud owner of the “New” iPad (a few days prior to my actual birthday), complete with awesome keyboard case. Do I feel guilty? Yeah, a little bit but I remind myself how much it may help in homeschooling and I get over it.

So my birthday was spanned out over two days because since Austin and I share a Birthday we have to work it out that we both get what we want!

Starting about midnight, my awesome Facebook friends start wishing me a Happy Birthday which always makes me feel so special and loved. I always try to make a point to thank each one of them individually because they individually posted on my wall so it seems only right. I remind you, I have been in a “funk” but it started a couple months ago and seems to have just peeked around my birthday. I have been wanting to share my poem I had written about my Baby Brother for some time now and my mood coupled with my birthday; it was finally time to blog it. So I set at this computer and poured my heart out on this blog. After finishing it, drying my tears, and posting it, I began to feel better. A weight came off my shoulders and I felt…well, better! I am not sure why blogging that made me cheer up but it did. Maybe it was a fact that I just needed to have a good cry over something that mattered, or maybe it was because I could finally get that “laid to rest” in my heart. Either way I began to perk up.

I checked Facebook one more time before bed and had a couple of sweet condoling wishes about my Baby Brothers Blog which of course made my heart smile and a few more birthday wishes too and then I headed to bed.

At around 7:30 AM my mom called to wish me a Happy Birthday! This is kind of her “thing”, she loves to wake me up early on my birthday. Which is funny because one would think one would want to sleep in. I was already awake (thankfully) but was just laying in bed, being lazy (hey I am allowed- it’s my birthday!) 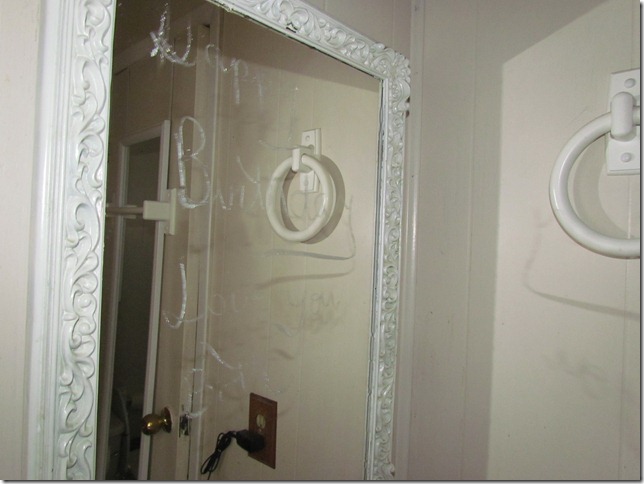 I crawled out of bed while still on the phone and noticed on the bathroom mirror my hubby had wrote in soap, ”Happy Birthday Love you both”. I smiled to myself knowing he thought about us before he headed out to work.

Mom and I chatted for a while and I heard my two littles get up. Anna walked out the front door and Adam went  out the back door –suspicious– but I was on the phone so I just shrugged it off. My hubby came home from work for his breakfast break before starting his mail route  and Adam brought me some cards he and Anna had made. I got off the phone with mom and checked out my cards. 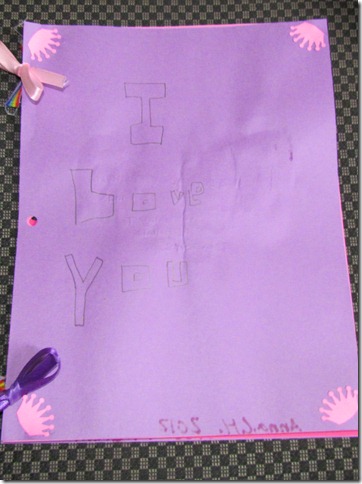 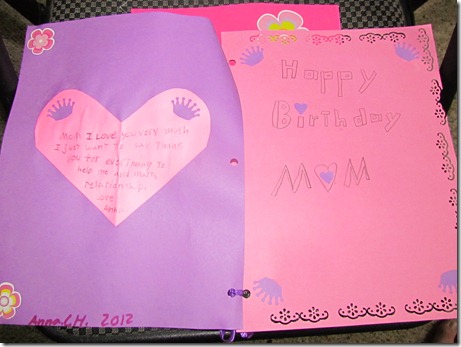 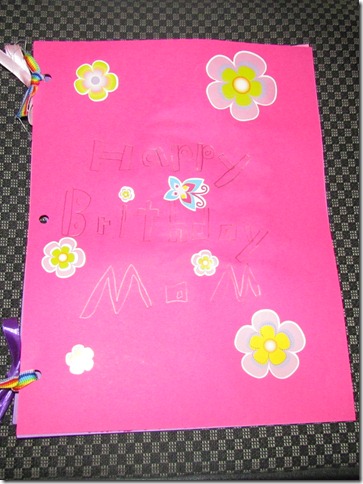 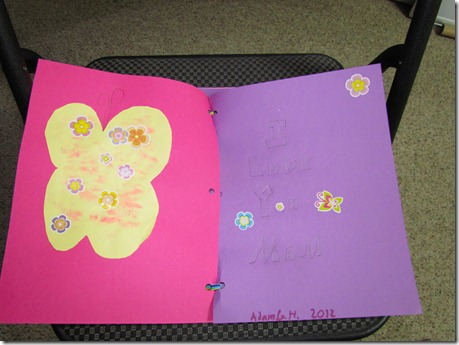 I love that they took it upon themselves to make me cards, such thoughtful children.
Next they brought in a gift bag for me. 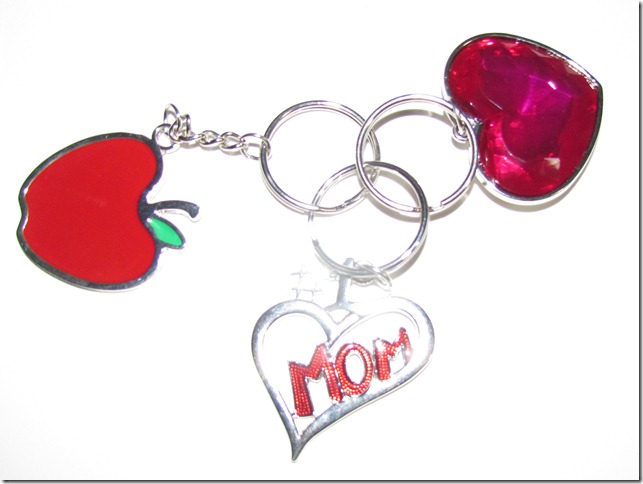 In it I found three wonderful key chains they had bought me. Adam told me the “Apple” was for two reasons, first it matched my new Apple iPad and second (I quote) “Like in the old days when they would bring an apple for the teacher and since you are our teacher, it works!’”
The #1 Mom is of course because, “You, – are one – and the heart because it was such a pretty big pink jewel.” ~love my kids sooooo much~

I sit down at the table with my husband while he eats breakfast and Adam told me how he had gotten up when daddy did to try to get him to open up the car so they could sneak their presents into the house without me seeing and at 6AM in the morning hubby told him to just go back to bed. (Hubby knows I do not want to be woke up at 6AM because I did not get to sleep until after 1AM.) This did explain their suspicious behavior from earlier though. Anna said as soon as she had gotten up, she snuck into my bedroom and snuck my keys off my purse then had to sneak past me who was sitting on the couch, without the keys jingling. She then retrieved the gifts from the car and took them to the backyard. Adam met her on the back porch and she told him to go open her bedroom window. They then worked together to sneak the gifts in the window, put them in gifts bags, and give them to me to open (all happened within 5-10 minutes.) I had a good laugh at their dramatization of the events.

Austin then brought me his “card.” 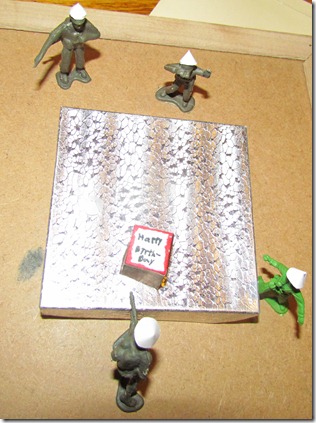 He thrives on being different….so his story goes as this:

Late last night when everyone else was in bed (or up blogging, as I was) he snuck into his bathroom (so no one would see a light on and scold him for still being up) and set up this “Birthday Scene.”
Anna interjected –“So that explains why your bathroom light went out when you heard mom walk by and the came back on!”-

I said, “Aww, they even have little party hats!” He said, “Yeah, that or they are waiting for an alien invasion!” Which I busted out laughing at this point knowing he was referring to the movie, “Signs” and the tin foil hats. 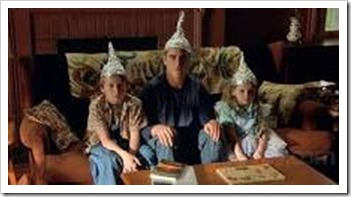 I said, “ Where am I?” He looked at me and pointed (at me.) So, I was to be part of this party in my current form (a giant civilian). I was laughing pretty good at this point! He even made a little tiny party hat for me, which of course I tried to put on and it almost got lost in my puffy hair so I took it back off. 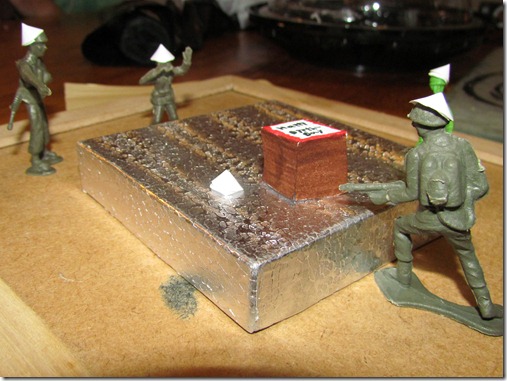 He explained the army man with the binoculars was really Anna taking pictures, he was the flamethrower person lighting the cake, “I had to use the flamethrower guy because he was the only one who could light the candles” ~I would have loved to see someone try to light a candle with a flamethrower in real life hahahaa~, dad was the one pointing (making sure it is done right), and Adam was the bright green one, “Just being Adam.”

What a wonderful family I have!!!

Both of my sisters also called and wished me a happy birthday, this is a must or they are in trouble for a year.

When Stewart got home from work we had to do our regular shopping. We let Austin choose where we would eat, as a birthday privilege. 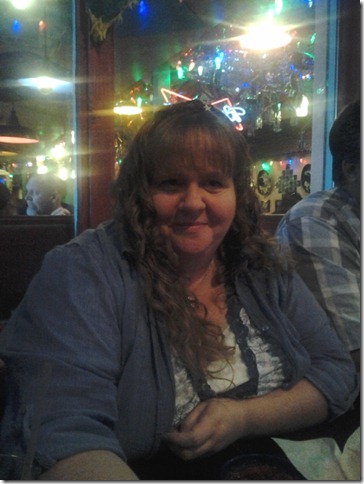 He wanted to go to Del Rio where we are so well known that we have, “Our Table”. He made us promise not to let them know it was our birthday, I told him, “No worries, I don’t want to be sang to either!”

With our birthday falling on the Sabbath, we spent the rest of the evening, prepping and “bringing in the Sabbath” which always ends with a dessert. As a birthday privilege, Austin got to pick our Sabbath dessert which was a store bought chocolate “ice-cream” pie. We also let him open one of his presents, the board game “Risk.”

The next day the kids and I spent the morning in a 3-4 hour long “Risk” game, which I won! (Only by default of Adam backing out and I taking over his territories but still) ~I WON!~

When hubby got home from work, we dropped the kids off at my sisters so we could have a “date night” for my birthday (babysitting was her gift to me.) Hubby took me out to eat at Cheddars then we rode around where we use to live, and took a little trip down memory lane. We looked at the log house that Stewart had built. This is where we had lived when we were first married. We talked about how Austin, when he was 4 or 5, would ride in the yard on his little electric four-wheeler with his eyes closed, turning the wheels in and letting it go around and around in a circle with not a care in the world. At this point I got sad. Then it dawned on me, I was not sad all this time because I am getting older, I was sad because my first born baby boy is getting older. Austin turned 17 this year. In one year he will be heading out into the world to be a man. Austin reassures me he is in no hurry to fly from the nest, but be that as it may, he will still have to go into the world and work. I shook off the blues and decided not to worry about it today, I have a whole year before I have to face that and today I just was not going to.

Hubby and I enjoyed the rest of the evening just riding around and smiling at memories, sometimes smiling through the tears.

Posted on October 13, 2012, in Celebrate and tagged Family, Holidays. Bookmark the permalink. 1 Comment.

← To My Twin Brother
Torah Portion – B’reisheet “In the beginning” →