To Homeschool Through Summer or Not

To Homeschool Through Summer or Not… that is the question.

I was in the big middle of a blog post about how we proudly don’t comply with public school schedules and how wonderful it was to school all year long taking off a week or two here and there when ever we wanted too, when it happened… 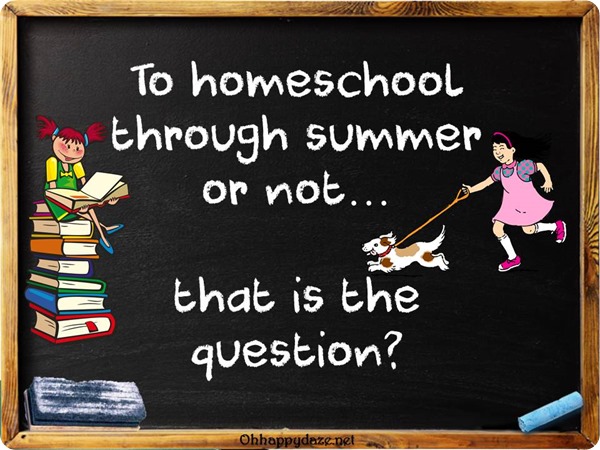 I had a full blown melt down. Nothing much different happened that day to set me off, my teenage daughter still had a teenage attitude about math, my dyslexic preteen son still struggled through his reading assignment at the same pace he always did. But today BECKY was different.

I had not slept well the last few nights and I was busy trying to get my blogs done and published to meet my self proclaimed deadline. I was grumpy because my diet had some major set backs when we started dealing with my hubby’s minor wreck ( I stress eat.) I was overwhelmed by my ever growing “to-do” list that never seems to get done. The last thing I wanted to do was school. I managed to hold it together through, math, spelling, and reading and finally I just had to stop. I told the kids I was being  nice today and letting them off school a half day early… little did they know, it was because I was trying not to have a break down in front of them.

I laid in my bed frustrated at everything. Thinking maybe I was just sleepy and needed rest, I napped. I nodded off for a bit but when I woke up, I think I felt worse. I just laid there,tears in my eyes and thought… “I am so disappointed in myself… “ We had only been back to school two days after having the two week break (because of the wreck) and yet I could not manage a full day of school without taking a nap? “What am I, 5? Geez, Bec, get it together girl. You bought all this curriculum to make your life easier at schooling, why are you having such a hard time?“

I anxiously awaited my hubby to come home from work, I needed my big strong man to hold me and tell me it will all be ok. He called telling me he would be home in an hour and I made the mistake of asking him what he wanted for dinner. He answered as he always does, “I don’t know, what ever you want.” I just got mad and  thought, “Why do I have to always decide what to feed everyone, why do I have to always cook…ugh!!!”  I told him gruffly, “Fine I‘ll figure it out… “like always!”

I went in the kitchen pouting and grumpy and decided to make homemade spinach & chicken taquitos. I pulled out my baby spinach leaves and put them in the food processor, impatient as I was in my bad mood, with the food processor in full spin, I took out my wooden spatula to push the spinach down to speed up the process and… Bam! Crack! Whirrrrr! Of course, my grip slipped on the spatula and it fell down and got stuck in the chopper blade sending the handle wonky and breaking the “add spout” on my food processor and chopping off bits of my wooden spatula into my chopped spinach. I quickly turn off the food processor, threw away the spinach,plastic, and wood combo I had created and went back to my room to cry. This was just how my day was destined to go, right in the trash! I tell you all of this so you can see how bad my attitude stunk!

Thankfully, my hubby is an amazing man and knew when I was on the phone that I was having a bad day. He had stopped by the store on the way home and bought stuff to make chicken fried steaks (his specialty.) He came in the bedroom where I laid pouting and rubbed my back and said, “You just lay in here and rest and I will cook dinner and call you when it is done.” I shake my head ok and he went to work his magic in the kitchen.

He came and got me for dinner (which was wonderful as always!) I ate mostly in silence only speaking once to tell him thank you and that the food was wonderful. He asked if I wanted to go sit out on the porch while the kids cleaned up the kitchen, I said, “No, I can’t lay down on the porch.” “Well lets go lay down on the bed then…” He lay beside me holding me while I whined about everything and nothing at all. He reassured me that I was not going crazy (though I felt like it at the moment) He assured me I was not a horrible mom (though I argued with him about it.) He told me, “Baby, you are just tired.” That… I agreed with.

The next day my mood was not much better. I thought to myself, “I just can’t keep doing this!!” I have been in homeschool burnout mode for a very long time and it is affecting everything. I hate schooling, they hate being schooled, I do not want them public schooled, I cant afford private school… what am I going to do?” So while I was contemplating all of my options, I happened across a blog. It was written by a homeschooling homeschooler. She made the statement that one thing she hated when she was homeschooled, that she did not want to do with  her own kids, was school through the summer. She said that being homeschooled made her feel a bit like the odd duck already but schooling all year round, while her public school friends were out for summer, made it worse. I pondered, “Hmm, I think my daughter may feel this way.”

The blogger also mentioned that she needed a break to re-energize and so did the kids. That because they took the three months off, it gave them time to rest, relax, and by the time school was to start again they were ready and excited to go by school supplies and dive in to a new year. It really hit home for me. I thought, “Oh how wonderful it would be to be able to take three months off.” A chance to take a break, reorganize, refresh… I wondered what hubby would say about the idea of taking off three months when it seemed like I had just had an extended spring break dealing with the wreck issues. I had to bring it up to him because I felt maybe this was God giving me my answer to my problem. But I was apprehensive about approaching him about it, the last thing I ever want to do is have my hubby disappointed in my for “wimping out” and needing a break. (My words, not his, he would never say that to me.) I felt a tad bit of confidence about it however, simply because we had finally got caught up in school for once we were not behind in a grade level. The only thing is, I was scared to death we would get behind again if I dared take off.

We went to the local state park that evening, had a nice picnic, walked a mile around the park for exercise, spotted an adorable white squirrel, shopped and then drove home, and at no point could I muster up the courage to talk to him about my “summer off” idea. I didn’t want to “ruin” the lovely afternoon we were having.

Finally as we set watching TV I turned to him, and said “I have an idea but I am not sure you will like it.” He looks at me somewhat worried and say, “Whaaat?” I just blurted out everything… I am tired, I need a break, so do the kids, …. blah blah blah and I want to take the summer off this year.” There, it was out and I look at him hoping not to see even a hint of disappointment in his eyes. He chucked a little and said, “OK.” I really don’t know what I expected from him, he is never mean or anything to me, I think deep down I wanted him to be disappointed or mad at me because I was disappointed and mad at myself. He told me he thought that would be just fine and good for me and the kids. And that was that. A huge weight was lifted off my shoulders. I was so relieved.

So I am happy to announce, we are taking an early “summer” off!! May-July (because in East Texas it is to hot to be outside in August so we will get started back to school then and enjoy a cool May instead!! I had contemplated it before, but this time I am actually doing it!

The moral of the story is…

Moms, do not beat yourself up for needing a break. Don’t worry if you don’t “match” the other homeschoolers in your co-op with their awesome year round schooling. Don’t sweat it that you match the public school’s schedule when you try so hard to not conform. Just do what ever you need to do so that you are at your best to teach your kids. A mom who is excited and on fire for schooling will encourage the kids to be the same way about learning but if you (like me) just drudged through it and endured it, so will your kids. 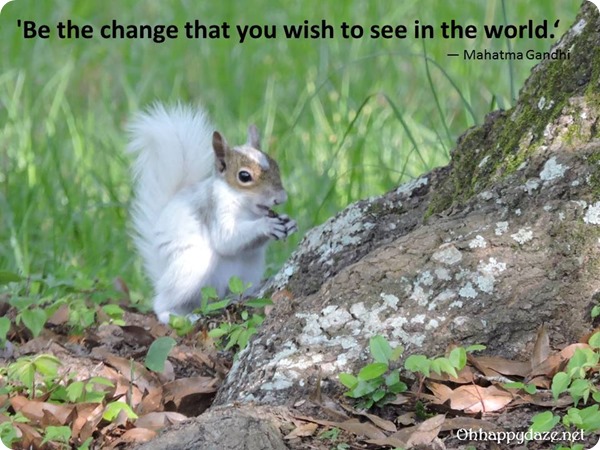 …and in your kids.

Think you too may be suffering from homeschool burnout? Here is the post I wrote last year on the subject, the signs, and what you can do to try to help get past it!

Ads that are displayed below this point are NOT my ads but those of WordPress.com and are not necessarily approved or supported by Becky Husband or Oh Happy Daze If you saw an inappropriate ad, please report it!

Posted on May 4, 2015, in Homeschool and tagged Homeschool Burnout. Bookmark the permalink. Leave a comment.