← Some Gave All
The Husband Clan’s Geocaching →

I was looking around on the Beaumont Community Calendar hunting for something to do with the family when I saw there was going to be a guided hike on the Sundew Trail. I was excited, we had just studied about carnivorous plants in Science and the Sundew Trail had the Pitcher Plants and the Sundew plants which are both carnivorous. Although we had been to the Sundew Trail before it was in the fall and with the change of the seasons each trail can offer new and interesting things to study.

When  we arrived at the trailhead no one was there. The hike was suppose to start at 10 A.M. so we waited a little while. The kids occupied themselves taking pictures of random critters around the pavilion. 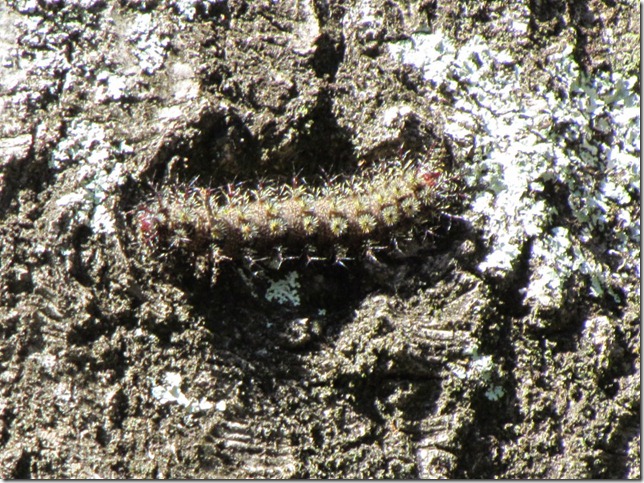 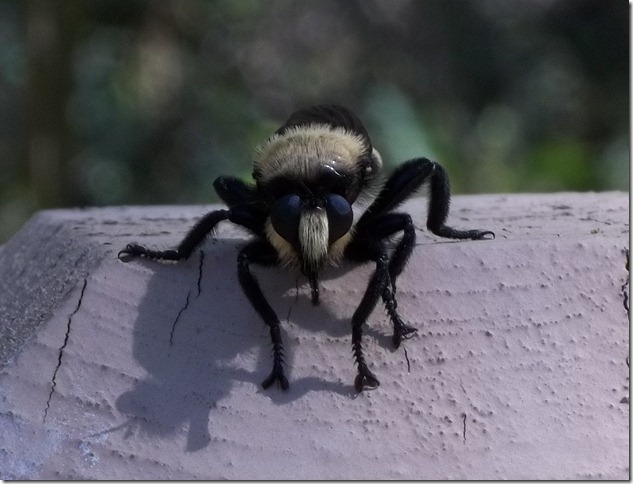 Finally giving up on a guide we walked the small loop of the trial to see if we could find the Sundew plants. We spotted a few of the locals and shot some pictures.

A pair of Red-Bellied Woodpeckers

A Dragonfly camouflaging it’s self on a Pine. 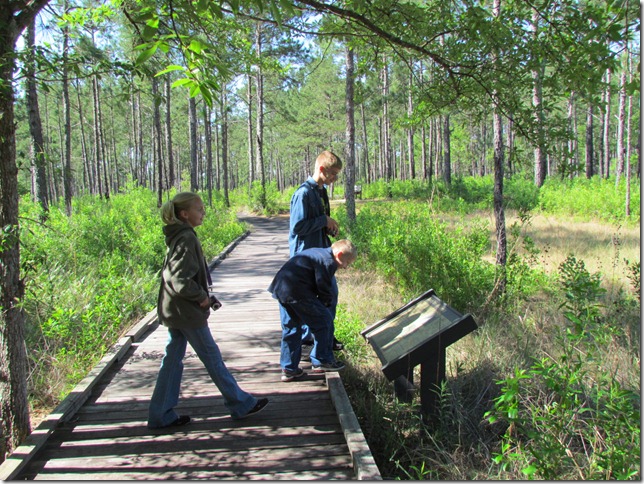 Reading the signs didn’t give us any information of the location of the meat eating plants we were hunting.

I tried to locate them on the map but I didn’t have much luck there either.

We walked the whole inner loop and once we arrived back at the trailhead people started showing up, about 10:30AM. Apparently they gathered at the Visitors Center then drove to the trail from there.

We decided to go ahead and walk the trail again hoping the lady guide could point out local vegetation and  the coveted Sundew Plant that Austin (by actually reading the pamphlet) discovered is tiny, the size of a dime.

The lady showed us on a poster how different pollinators are attracted to different colors of flowers and that bees do not see red, instead they see black. So red flowers are mainly for attracting birds like the Humming Bird. Cool! We learned something. Unfortunately that was the extent of the learning and that was before we even started the trail.

As we walked along I expected the lady to point out flowers and ask which pollinators would be attracted to each one (like she said she would), but no. Seeing that she apparently was unsure of herself I stepped up and started pointing out the few flowers that were actually growing along the drought ravaged trail. I believe we only spotted three flowers in all. The guide didn’t even see them, she was talking to two other ladies in the front of the group. I was getting a bit annoyed and frustrated so when we arrived at the split in the trail I interrupted the lady and asked her where the Sundew Plants were. We figured out they must be on the other trail just a little ways in. She said there was four different kinds of carnivorous plants on the trail and the Pitcher Plants were growing but because of the dry conditions she didn’t think any of the others were. I kindly told her we were veering off the trail here to go and look and we would catch up later. We still did not find any Sundew Plants but at least I know we were looking in the right area.

We decided to head back and catch up with the group. Along the way we saw the Pitcher Plants (again).

We arrived back at the trailhead and they asked if we found the Sundew, I said “no” and asked her where the other meat eating plants were on the trail and what they were. She said they were water plants and they probably were not abundant either because of the drought, She couldn’t think of the name of the plants and Austin piped in and said “Bladderworts right?” (I beamed with pride) She said yes that was the other plants.

The guide had expected a lot more kids and yet there were only my three and one toddler. She apologized that the hike wasn’t as great as she had hoped because of the lack of attendance and she handed out worksheets for the kids. Then she asked if we would like to try to do a origami bird in honor of Migratory Bird Week. 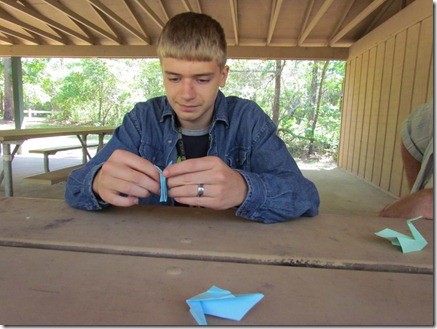 Of course we all said “SURE!”  Adam loves origami so this was right up his alley.

She gave the kids two educational posters and thanked us for coming. I have to say I felt sorry for her, I think she was very self-conscious and it probably didn’t help I told her we were homeschoolers and we had just been studying carnivorous plant. I think that may have intimidated her a bit. I do think she could have tried to involve the kids more on the trail but who knows what may be going on in her life, I am sure she did the best she could. At first I wasn’t sure I would go on another guided hike but now after thinking it over I believe I would give it another try.

← Some Gave All
The Husband Clan’s Geocaching →