Instead of waiting till the end of the year to try to remember all the things we had enjoyed throughout 2016 I decided to (attempt) to blog at the end of each month about the past months adventures! So here is January…

This month was a month of change and adjustment… it wasn’t easy but we made it!

We had a big dinner, the last one with all my kids still living at home… tomorrow our oldest moves out on his own. A decision I did not agree with but did not try to stand in his way. A parent never thinks their kids are ready to venture out but sometimes we just have to let go and let God take care of it.

After dinner we went on a  hike, watching them walk away, my heart is heavy knowing things aren’t going to ever be the same after today. They will grow up and move on with their lives and I will be left with sweet memories that make me cry and smile, at the same time. 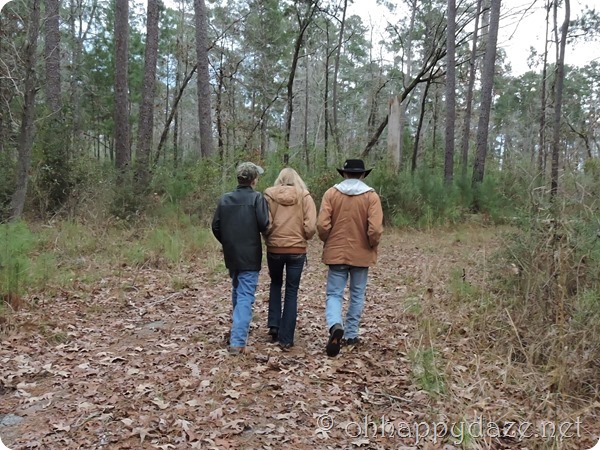 As we walked, we were blessed to see a bald eagle and it’s large nest high in the tree! I was hoping to get a closer picture of the eagle but it stayed high in the sky, shouting warnings hoping we didn’t see it’s nest. A protective parent, I understand my majestic feathered friend, I understand…

We finished up our day with a little skateboarding and RC car racing at the mostly vacant boat ramp.

As we enjoyed our afternoon together, the eagle couple decided to chatter overhead as they soared in the sky. My mind and heart flooded with thoughts on scripture mixed with thoughts on my own fledgling leaving the nest the next day. It was a bitter sweet day.

Deut. 32:11 like an eagle that stirs up its nest
and hovers over its young,
that spreads its wings to catch them
and carries them aloft.
12 The Lord alone led him; 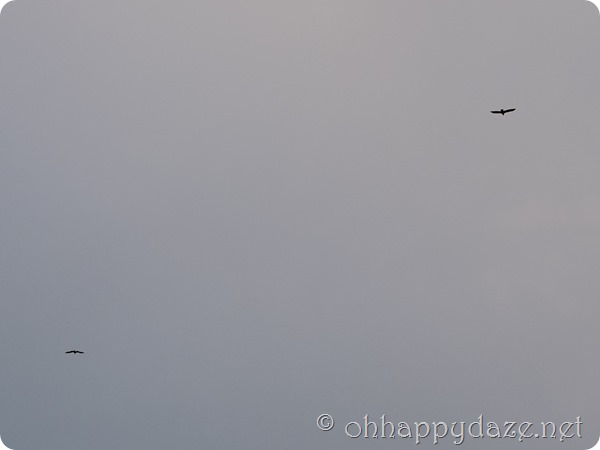 It didn’t take long for us to get the camper moved onto Austin’s rented property and hooked up. His cousin (the electrician) came down to wire the plug for the camper into the power pole, while his daddy, with the help of his little brother, hooked up the water and sewer. We put Austin in charge of the digging the lines in. Anna refused to help, there had been a lot of tension lately and I told her if she didn’t want to help she was not required too, so she went skating down the road. This move is hard on all of us.
A couple hours later, our oldest had officially moved out.

We left him to settle in. With tears in my eyes, which is how many of my days were prior (and after) this moment, I try to just breathe and trust God.

To get our mind off of everything and get busy trying to get back to a bit of a normal life,  we went to the lake and played with our RC cars in the big pavilion. 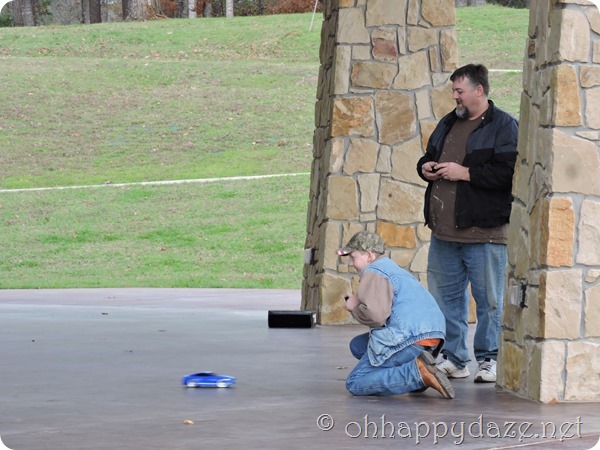 The guys had a good time, even Anna joined in a little!

A fellow geocacher had asked me to do a favor since I live near his cache. He asked if I would go and paint their newly replaced geocache so it would not be so obvious since the cache he used was bright white. We hadn’t found that particular cache (although I had been “eyeing” it for a while) so I said, “No problem!” I needed to have things to do to keep my mind busy and not thinking about my empty nest so we tried to do stuff as much as possible to help adjust into our new situation.

I rarely find geocaches anymore because the kids are faster than I am. On this one, I had the advantage of a hint but in all fairness the hint was in code, the hint was, “What movie was John Travolta and Miley Cyrus in?” I had to use Google to help… do you see the geocache? 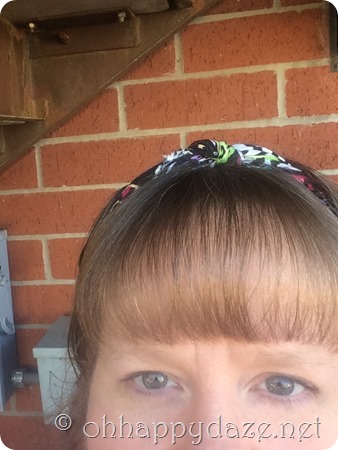 On the trail to the cache we had to paint… I tell the kids, “Y’all know it is still hunting season… we should have wore brighter clothes.” Their response is this…
“Let’s pretend to be ten point bucks…”

I smile at their silliness.

The cache now painted with the paint that looks like dirt and our mission was accomplished so we could head back to the truck.

Adam jumped down into the “wash out” by the trestle and and hollers “Help me!” I guess the troll under the bridge was getting him! I love this little boys imagination! 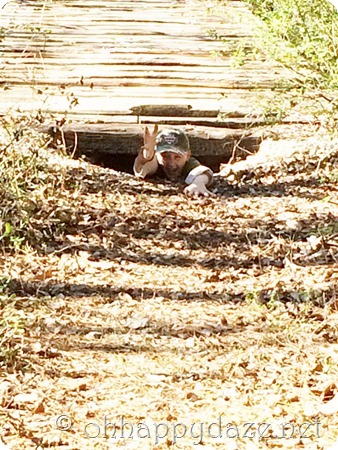 It was a good day, my kids make me smile.

The next several days we just tried get back into a rhythm of life, trying to find moments to play and have fun whenever we could. 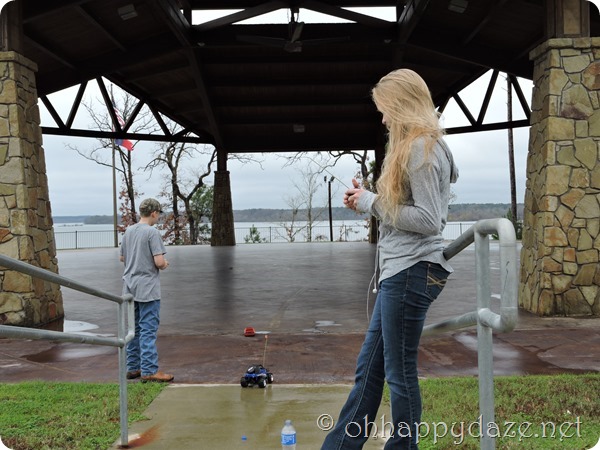 We had Ms. Sassy Cat spayed… She was a bit groggy after surgery but did great, I am glad we do not have to worry with her getting pregnant, with six cats, we have plenty! 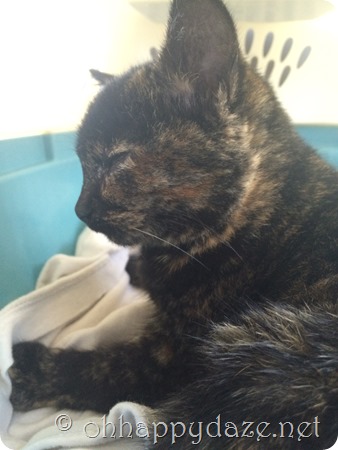 January 9th, Back in the Game

I decided it was time I bought my own RC car and stopped sitting on the sidelines of life and get back in the game… My truck is faster and better at getting out of the grass, but the battery life is short lived. That is ok, I only care to play for a little while then enjoy watching them play as I take pictures.

We took the kids to play on the kangaroo jumper beside the lake… they jumped, and played and wrestled. It was good for us to be out on a beautiful day but it was COLD! Hubby and I decided to sit in the truck and watch where it was warm. We laughed at their antics. I am realizing this is the new “us”… four of us….

We invited Austin over for dinner then to go race cars with us. It was a pleasant (all be it short) visit. A sweet flashback to “once upon a time.” Then he was off again, to spend time with his girlfriend.

Hubby and I took some time for ourselves and went on a “Day Date” to a park for a picnic. It was nice and peaceful and pleasant. The ducks and geese at the park were fun to feed until an impatient goose decided to try to latch on to my hubby’s pant leg. His response was, “Ah, I’ve been goose bit!” Naturally I had to get a selfie with our feathered friends.

We (well momma turkey) hatched out our first set of baby turkeys… I wasn’t sure she would have any viable eggs but we ended up with five new poults. I am still not sure what we will do with a bunch of turkeys! 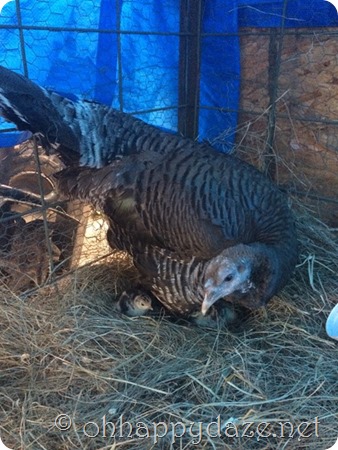 We geocached some more, learning to be a family of four… this is us. We let Anna drive the dirt roads to practice for her license. It wont be long before she gets her independence too.

January 29th, Learning to “Roll With It”

We took the kids to a Boykin Springs to skateboard… The sidewalk has a nice decline so they skated easily on feet, belly, and bottoms. I laughed hard when they rolled off, or crashed into us. I cheered when they made the turns successfully. 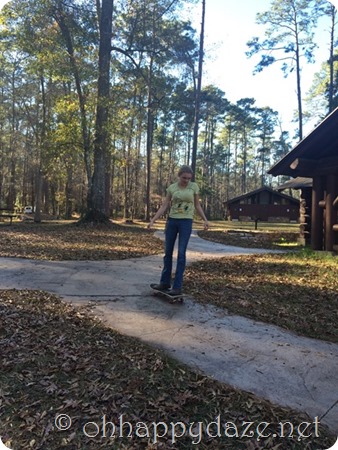 I smiled as they played beside the waterfall… 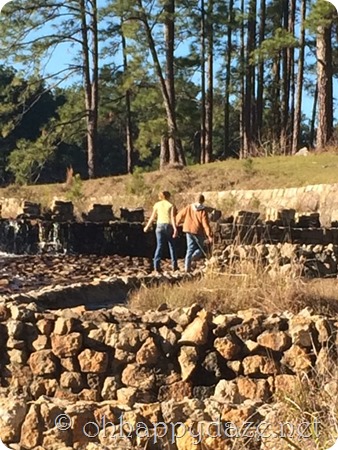 We laughed at them dancing together on top on boulders.

And I decided, we are going to be okay, even though our family down sized a bit and we don’t see our oldest everyday like we use too. We still have fun, we still laugh, we still do things and I’m going to be okay… most days.

Posted on February 6, 2016, in Family, My Journal and tagged Family. Bookmark the permalink. Leave a comment.