I was raised by a dad who had served in the Army in the Korean war, naturally I have a real respect for the military, so each Veteran’s Day and Memorial Day I always try to do something with the kids that is military related.  I want something to help the kids know that these military holidays have merit and meaning, that they are not a day set aside to barbeque or go shopping at the latest “Veteran’s Day Sale,” like the media portrays them to be. These days were set aside to honor those who were willing to “give all” for the sake of other human beings’ rights and freedoms. It is important to me that my children know that the freedoms  and the lifestyle they have, should not be taken for granted because many have fought and died for those freedoms and many countries that our military serve in do not have the same freedoms. It is crucial we teach the next generation the importance of the military and we should honor and respect each and everyone of our men and women who have served. 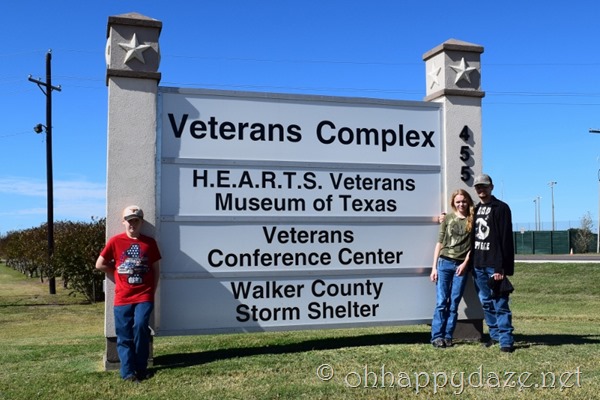 This year we decided to drive two hours to nearby Huntsville TX and visit the Veteran’s Museum.

The first part of the museum has a “mock” camp set up for the kids to explore. 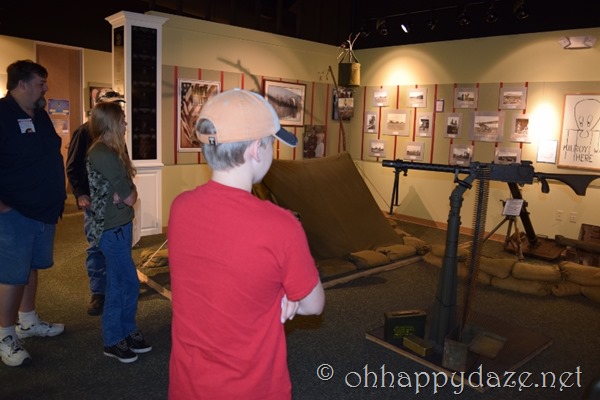 They were all stoked about the big guns and all had to give the rifle a try at holding and cocking it.

Adam had to check out the machine gun which was entirely to large for him!

After letting them “play” a bit we started down the timeline, walking our way through history.

One of the volunteers followed us around most of the time trying to explain it all to us.  Don’t get me wrong, I am happy he wanted to give us the tour, but for me and my introverted personality I just wanted to be left along and lost in my thoughts and emotions, so I let my more extroverted husband play the part of tourist while I stayed quiet and to myself.

I wanted to look at things, feel things, absorb the reality of it all. I wanted to know what it was like for dad in Korean, for Uncle Pat in Viet Nam. I wanted to relate.

My kids found the weapon display most interesting! 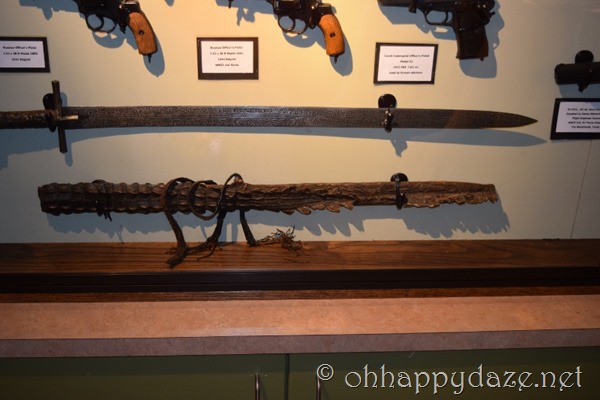 We stood there and talked about each weapon and where it came from and what it was used for. Austin really admired one of our most interesting finds, an alligator sword and sheath. I believe the man said it was from a tribesman in Afghanistan but I’m not 100% sure of that. He said the “scribbles” on the sword were their prayers inscribed on it. 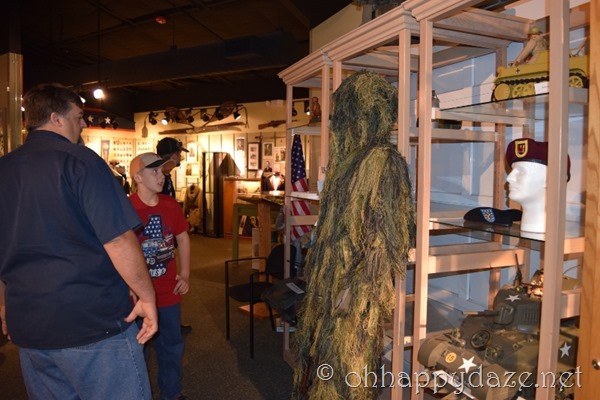 Anna remembered knot tying from a History lesson we had a few month back and asked me about which knots they had learned! Adam loved the ghillie suit or as I called it the “swamp thing” suit.

I paused at the Korea & Vietnam sections. They meant the most to me, these are the wars my dad & uncles served in.
I looked close at each picture hoping to catch a glimpse of maybe someone I knew, but if they were on any of those pictures I couldn’t recognize them. The backgrounds of the images were the same as my dad’s pictures from when he served, just different faces looking back. I felt grieved in my heart at the reality of war. Knowing my dad had to be there, knowing my uncles were part of one of the worst wars ever, the Viet Nam war, knowing my Uncle Pat lost his life over there.

By the time we got near the end of our journey through the timeline of the museum,  the volunteer had ventured off and for that I am very thankful, because we were stepping off into something I wasn’t really prepared for… 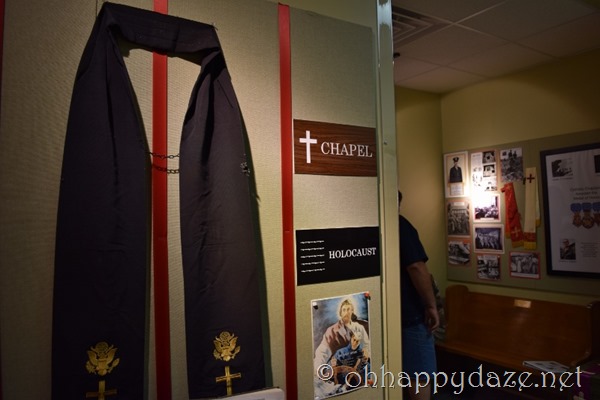 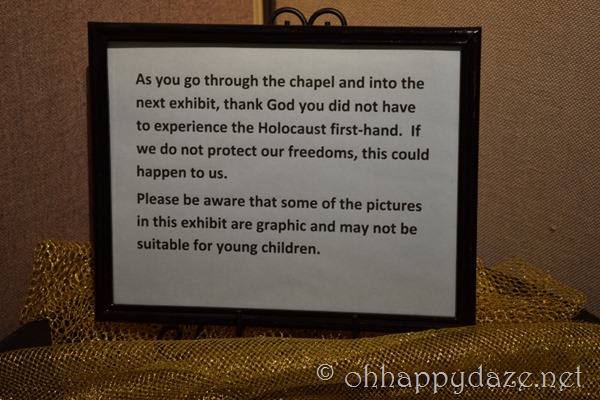 I didn’t notice the signage, nor did I see this notice until we left…

But as I walked past a partition, I was “hit in the face” with this… “Hitler” 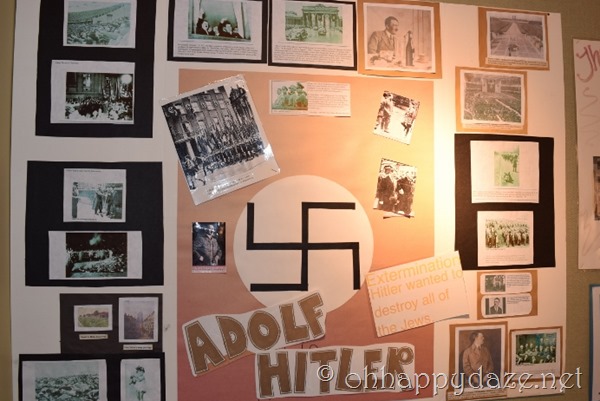 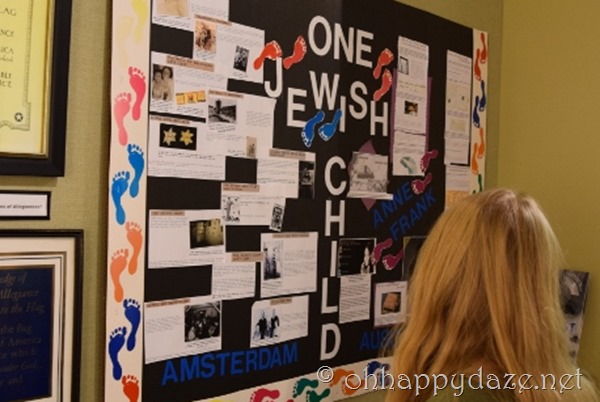 When I stepped to the back wall and actually started reading, I was brought to tears… 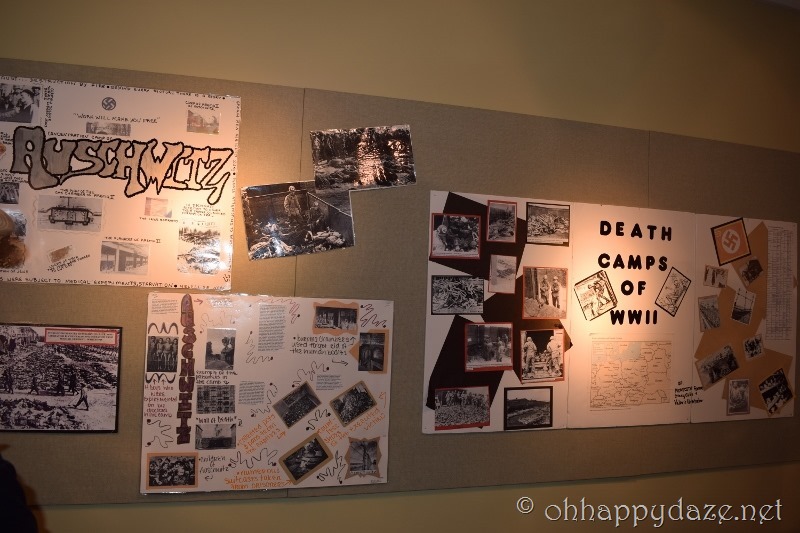 I wasn’t prepared to feel this much grief. I had seen the images before, I have watched the movies, but for some reason standing there in this museum, I was doing good to not completely lose it and break down into a bawling fit. It literally pained me in the center of my body, a feeling I can only describe as it deeply grieved my soul to the point of pain. I read about the experiments they did on women and children, about the countless deaths, I saw the images once again and I allowed my children to seen them. All I could say is, “How could they?” How can a human be so evil that they think nothing of doing this to other humans. It is an event in History I will never understand, ever. All I know is we can never let this kind of thing happen again. I still can not put to words what I felt or what I feel now.

I know often times we say that America needs to tend to America first and quit going over seas and tending to everyone else’s problems. And I understand some military actions are political and not moral,  but if no one is willing to stand up for people like the Jews, genocide would have been a reality for them. More recently, we have the terrorist groups in the middle east slaughtering Christians! It is our duty and privilege, as a great nation to stand up and defend those who can not stand up and defend themselves!!

I am sad… mad… angry … hurt… by the injustice in the world…and you should be too. If you have a chance, even if you have to drive a couple hours, go to a nearby Veteran’s Memorial museum. Take time to read, to look, to experience and most of all to feel. I can not express how much gratitude and love I feel for the men and women who serve in the military, knowing there are those out there willing to lay down their life for another human…

~Greater love has no one than this, that one lay down his life for his friends. John 5:13 ~

..and how much more greater love that one lay down his life for strangers…

Posted on November 11, 2014, in Faith, Homeschool, Inspirational, My Journal and tagged Veteran's Day. Bookmark the permalink. Leave a comment.