We woke first thing in the morning hoping to get a hike in before the heat became to intense. The summer-like weather in the spring has made me wish we were back in the winter. On top of the heat, there is no rain. Everything is so dry and fire danger is very high.  All winter I was looking forward to the spring with the flowers and birds and all but now I am disappointed. We decided last night to head toward Newton to check out some trails we found online. We chose the Canyon Rim trail to take on. We thought we would get in a couple hikes today. Of course, we were thinking that before we arrived at any of them.

We found the trail with a lot of help from my iPhone. It looks as if the trail has somewhat been forgotten. 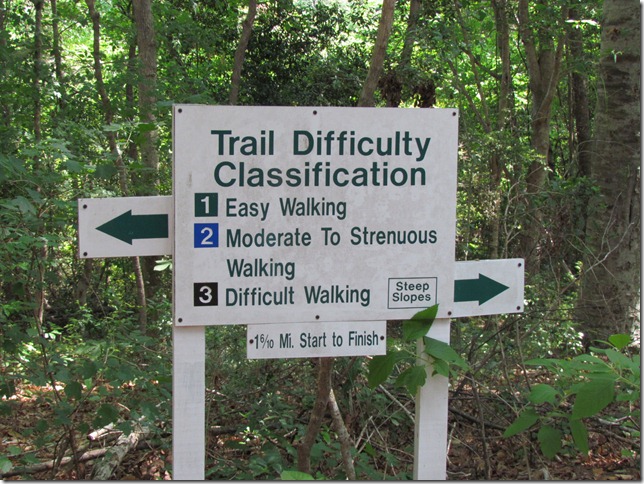 Well, that don’t look too bad less than two miles. We decided to start easy and then hit the hard trail.

Right off, my kids get into exploring and taking pictures. I guess they are well trained by now.

There were plenty of milkweeds flowers to look at.

I really like trails that have signs explaining things about the local fauna and any historical events that may have happened in the area. I commend Champion for having great signs on their trial. This  is “Bear Grass’”, or so the sign says. It says it is used to do basket weaving, I see a project in our future! 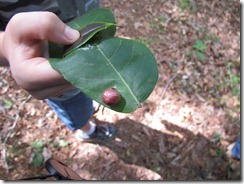 Adam likes leaves. He found a neat “two toned” leaf and a couple with some leaf galls on them. He compared the sizes and wished he knew what bug had made them. 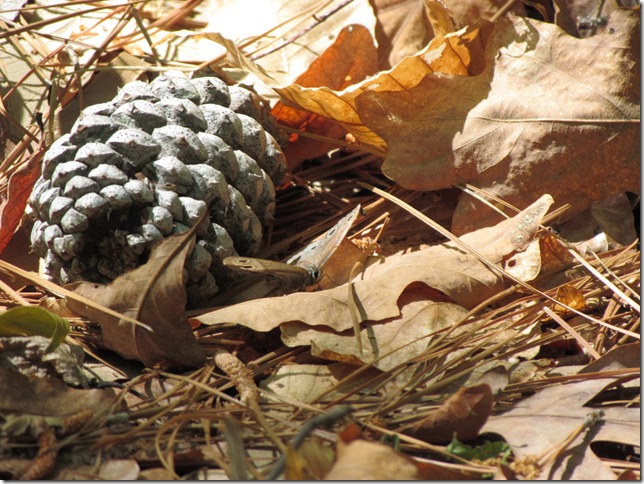 Can you spot the butterfly? There were several of these little Buckeyes fluttering around. 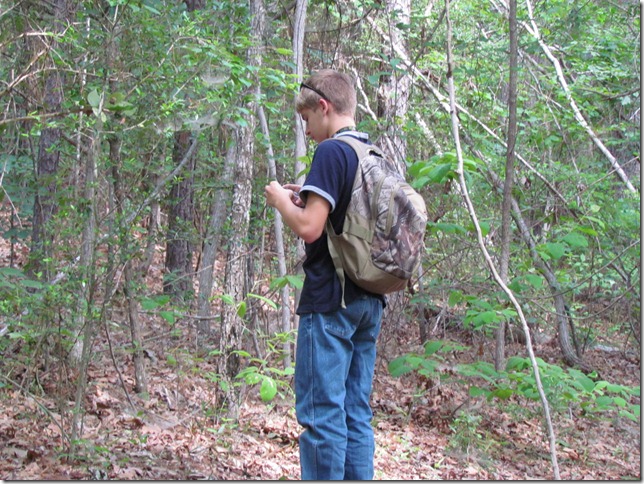 Austin was busy taking pictures of every spider web we came across, amazingly there were hundreds of webs everywhere on this trail. He did get some great pictures, though.

A Red Jumping Spider awaited his close up. Kind of creepy having him staring at you! 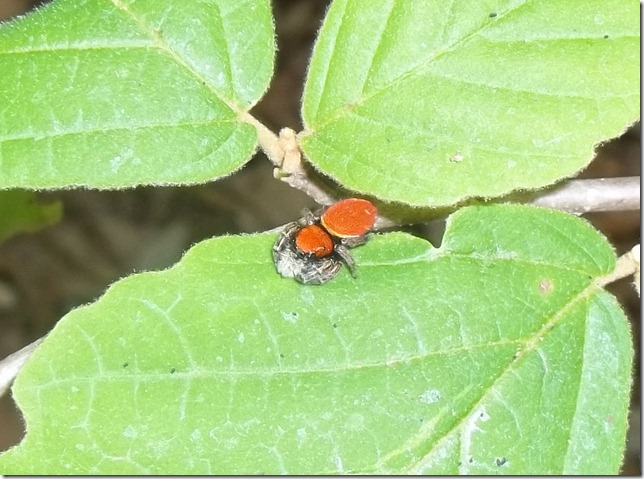 And his side view. 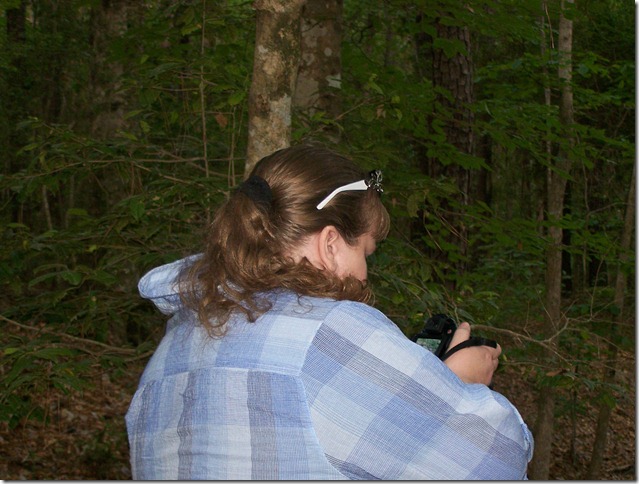 There was a little spring fed creek that apparently this “canyon rim” went around. Maybe because of the dry weather there wasn’t much of a creek, just a trickle of the spring coming out of the side of the bank.

Parts of the trail was a bit difficult, instead of going under like the rest of us, Anna though she needed to go over and got her foot stuck, she was not happy that I chose to get a picture rather than run to her rescue. 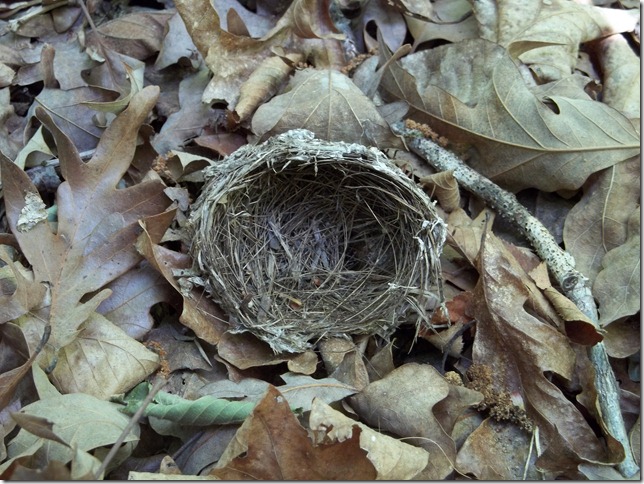 The next downed tree Adam, Anna, & I took an obscure trail around while the men folk crawled under the large oak. Awesome things can be found when you venture off the beaten path. Anna got a great picture of this little bird nest.

I was constantly calling to Austin telling him to keep up but he was busy getting pictures. I need to slow and chill and let the boy explore, but I was trying to keep all of us together and the little ones like to run ahead. He did take some very interesting pictures. 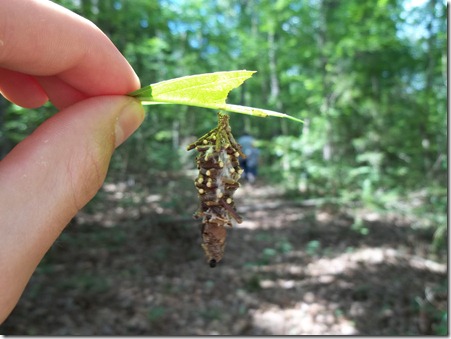 A blooming Bull Nettle and what appears to be a Bag Worm Moths Cocoon.

A katydid nymph and funnel spider he photographed. 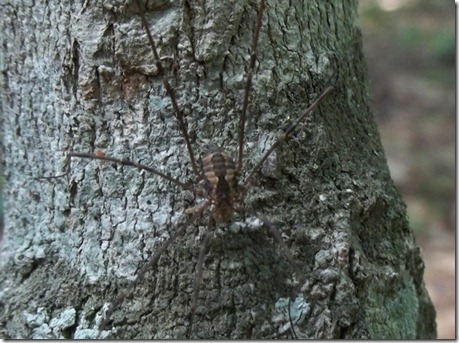 A group of Daddy-Longlegs huddling together and a close up of some that Austin think are Eastern Daddy-Longlegs because the coloring is a bit different.

We were starting to wear down and worry that we may have to dead head back to the car (which we hate to do). Not having a map so we can see where we are heading and how far we have to go can be very frustrating. We just kept moving forward hoping that the trail we were on, looped.

Stewart being tired and I wanting to lop, doesn’t mix well. 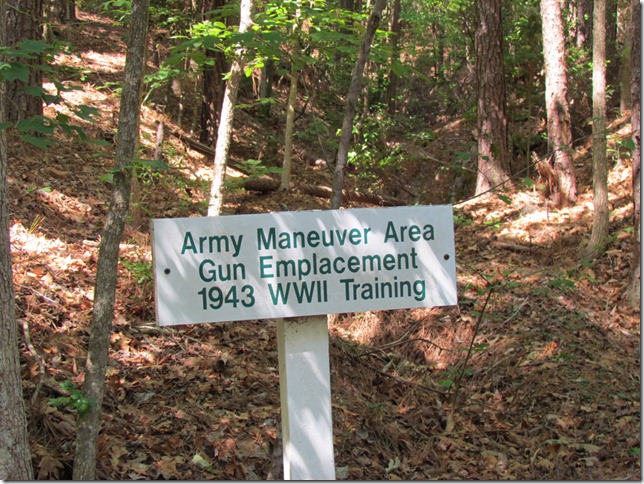 Just about the time, we decided we may have to turn back because the trail looked as if it ended we saw this sign.  It looked like there was fox holes and embankments all along this little gully although I couldn’t find any history to back it up on the internet just a mention or two that it happened in Burkeville, TX. We decided to keep going forward because there might be more history to be found. 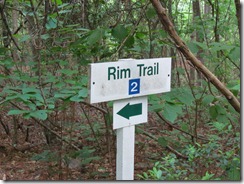 Finally coming to a sign that said we were at the end of the second trail, we had hope and trekked onward.

A little farther around the rim, we began walking on a wide path and then found this sign so apparently we were on an old logging road.

I was pleased with the many information signs that were on the trail. Several trees were labeled, Magnolia, Hickory, Black Gum, and Loblolly Pine. If the trail itself had been better maintained and easier to follow this would have been a really great hike. 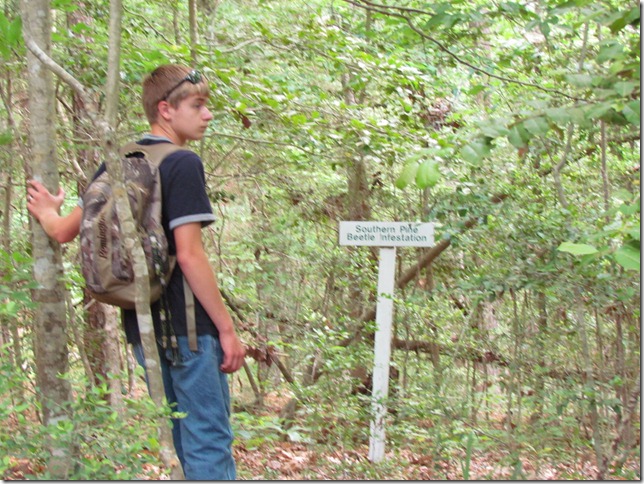 I thought this was kind of funny, the sign says Southern Pine Beetle Infestation, and yet there are no pine trees were they trying to make a point here! 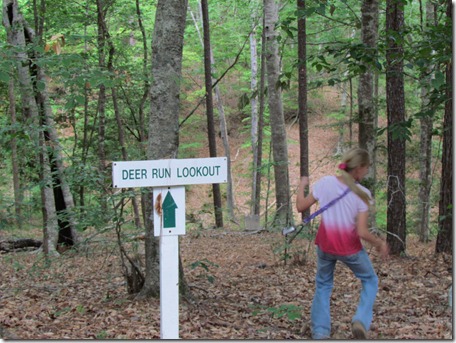 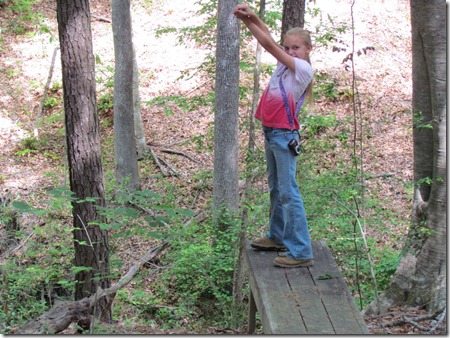 “Deer Run Lookout” so dear Anna had to run out and look. I tell her, “You’re not a deer!” “Uh huh!” She coyly replies. 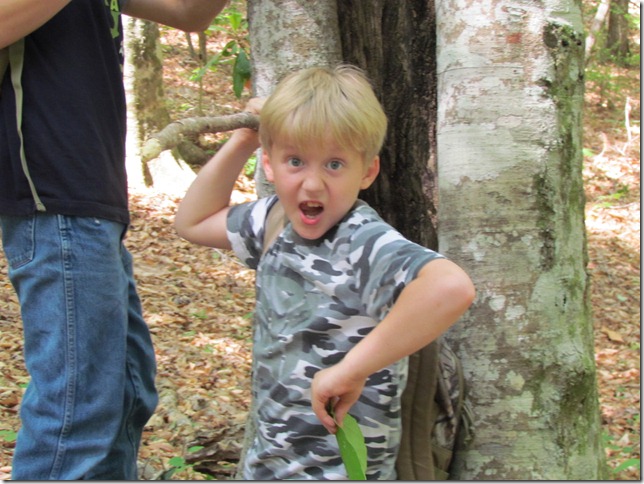 I think Adam was playing Indian Warrior and the tree with the hollow place in it was his Teepee and the stick was his spear. 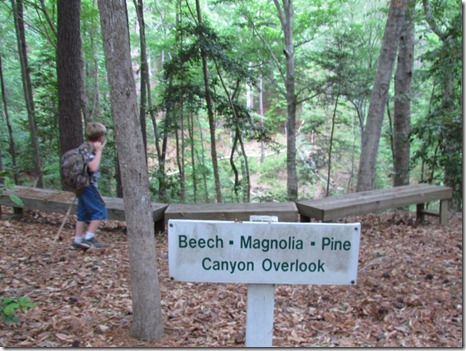 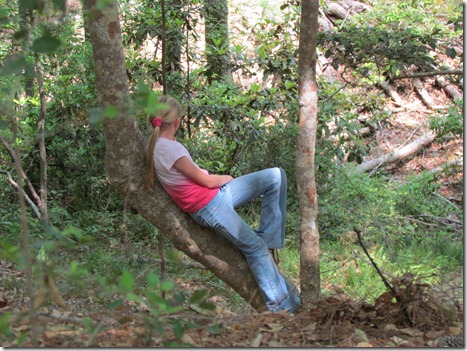 Anna props herself up on a beech tree growing from the side of the bank and looks out over the canyon. 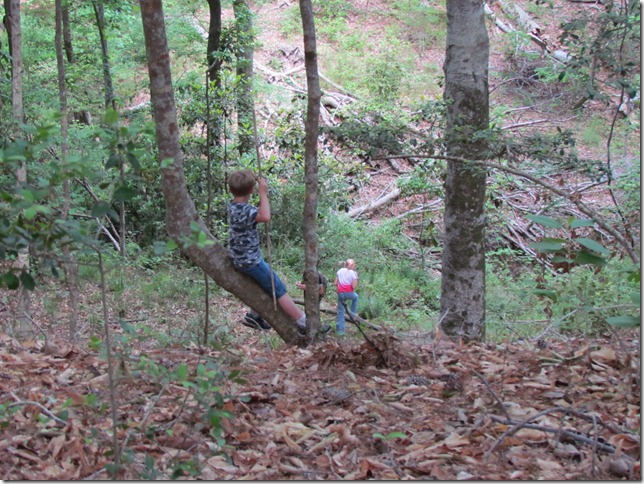 Of course, if Anna does it then so does Adam. He watched as Austin and Anna climb down the steep bank to look at the creek. 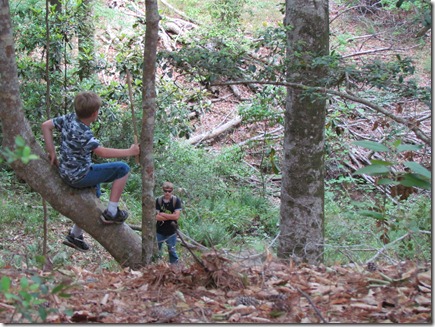 Anna goes climbing back up the bank and slips and falls down a little way, she jumps up, “I’m OK!” we all laugh at her silliness.

Austin spotted this web, “Oh cool, It looks like a sailboat!” Spiders can be great artists!

At this point, the trail is getting more difficult and it seems like we have already walked three miles. The signs are hard to locate which doesn’t help our lack of motivation. 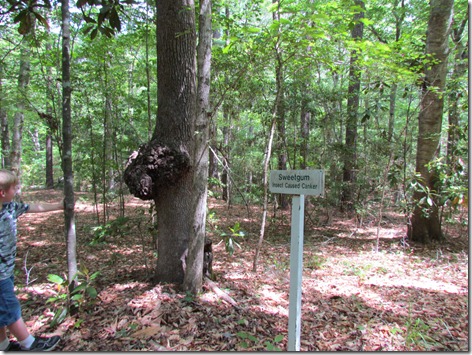 The information signs were often the only thing to let us know we were still on a trail. This first tree had Woodpecker damage, that is what caused the ringed to form around it. The next one, a Sweetgum, had a canker caused by insects.

We were very tired of the up and downs of the valleys and hills but we spotted the sign a few yards ahead of where we entered telling us we were almost finished with the third trail. We were very happy to know it was a loop around and we were not going to have to dead head back that whole way. Although I was not necessarily planning on taking on the “difficult” walking trail!

I was climbing the last incline and my foot slipped on the pine straw and down I went to my hands and knees. Being silly I started to crawl like that was the only way I would make it to the finish line and after two “crawl steps,” I almost landed in a pile of dead crow.

Stewart had seen it but I hadn’t because my hair had fell all in my face when I went down. He was saying, “Honey! Honey! Crow!” A couple more steps and I would have been facing first in a crow carcass! Ewwwww!

We were so happy to be back to the car. What was suppose to be only a 1.6-mile hike I swear ended up about 3 or more miles, either that or I have really gotten out of shape in the last few months not being able to hike.

I was happy as always just to be out and getting fresh air and sunshine and enjoying nature but we just have to get out more and hike because I feel like a big wimp after this one about whipping me. Needless to say, this was the only hike we did today, the others can wait till another day!

Affiliate Links: Thank you for supporting my blog by purchasing through these links.

Looking for great essential oils at affordable prices?? Check out Spark Naturals!! Be sure to save your 10% by using coupon code: HAPPYDAZE

Find pretty much anything you need at Amazon.com